Only In Indiana: Trauma doll volunteers do it to create smiles they’ll never see

INDIANAPOLIS – Here in Indiana, it’s not unusual to find Hoosiers doing something good in complete anonymity. They don’t do it for attention. They do it because they know what it can mean to someone in need.

Schemmel said she was diagnosed with Parkinson’s disease in 2013 after she turned 70. “I’m four years older, but I feel better now than I did then,” Schemmel said. Now, she said she can run several errands before getting worn out, unlike prior to going to Rock Steady. Schemmel said she plans to volunteer to help at the Hoosier Village site.

The hospital isn’t usually thought of as a good place to be. That is why so many people at this place work so hard to put as good a face on things as possible.
Sometimes that means no face at all. In fact, no one ever sees these faces. Every Monday for at least three years, some say more, these women gather to cut, stitch, stuff and paint dolls to put a smile on the face of a child they will never meet. “I take them home and sew them,” said Judy Zinn. “I am not a stuffer, I am not an artist so this is something I can do.”

“We want to fill all the nicks and crannies,” said one volunteer as she worked. Some of the trauma dolls have no face, giving the child an opportunity to draw their own… thereby revealing their own feelings. The rest are two faced. “I think of all the children that will get some joy out of this and be able to express themselves being sad or happy,” said Sylvia Baker. “The doctor can ask how they feel and they can put up the smiley face or the sad face. It’s hard for a small child, particularly if they don’t feel good, to explain to you how they are feeling.”

It’s also a great opportunity for these residents at Hoosier Village to get together socially. “Our hands are busy and our chattering is just a side issue,” another resident told us. We asked Jane Fay if there was anywhere else she would rather be on a Monday morning “No, but I often have to go to the ophthalmologist,” she said.

Another resident, part of a Parkinson’s group, said “We discussed apathy, that apathy is the killer of people with Parkinson’s. You don’t have apathy if you come and sit in this room.” And the goal is to make sure there is no apathy in this room as well. “It’s good to know these children are enjoying these,” said Baker. “They just hold them and play with them and look at them and who knows what they are thinking. I would love to be in their little minds and know and see.” 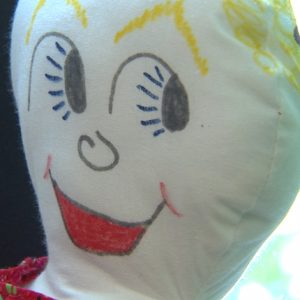